Welcome to the TTE!

NOV 18-20, 2022​
In 1926, radium was a miracle cure, Madame Curie an international celebrity, and luminous watches the latest rage - until the girls who painted them began to fall ill with a mysterious disease. Inspired by a true story, Radium Girls traces the efforts of Grace Fryer, a dial painter, as she fights for her day in court. Her chief adversary is her former employer, Arthur Roeder, an idealistic man who cannot bring himself to believe that the same element that shrinks tumors could have anything to do with the terrifying rash of illnesses among his employees. As the case goes on, however, Grace finds herself battling not just with the U.S. Radium Corporation, but with her own family and friends, who fear that her campaign for justice will backfire. Written with warmth and humor, Radium Girls is a fast-moving, highly theatrical ensemble piece for 9-37 actors. Called a “powerful” and “engrossing” drama by critics, Radium Girls offers a wry, unflinching look at the peculiarly American obsessions with health, wealth and the commercialization of science. 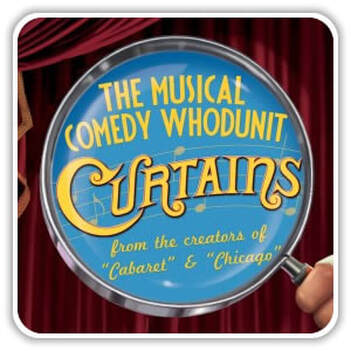 March 10-12 & 17-19, 2023
​Boston, 1959. At the Colonial Theatre, the cast of Robbin’ Hood takes their bows on opening night. Just as the curtain falls, so does Jessica Cranshaw, the profoundly untalented leading lady of the production. Enter Lieutenant Frank Cioffi, a fast-talking cop with a love for musical theatre. He quarantines the cast and crew inside the theatre while he searches for clues. But Cioffi doesn’t just investigate the murder--he also offers advice and insight into improving Robbin’ Hood. The musical will open again in 24 hours with a new leading lady, so the clock is ticking to find the killer and put on a killer show. Who could it be? Carmen Bernstein, the sassy and brassy producer? Christopher Belling, the campy and egotistical director? Georgia Hendricks, the lyricist who replaces Jessica onstage? Niki Harris, the ingenue with a secret? Everyone is a suspect, and only Cioffi can make sense of the evidence. Curtains is a musical-theatre parody of whodunnit classics, with numbers ranging from the classic musical theatre song-and-dance “A Tough Act to Follow” to the heartfelt “I Miss the Music.” A comedic send-up suitable for all ages, Curtains will have the audience laughing until the last curtain falls.

Click here to purchase tickets (from Feb 10)
Powered by